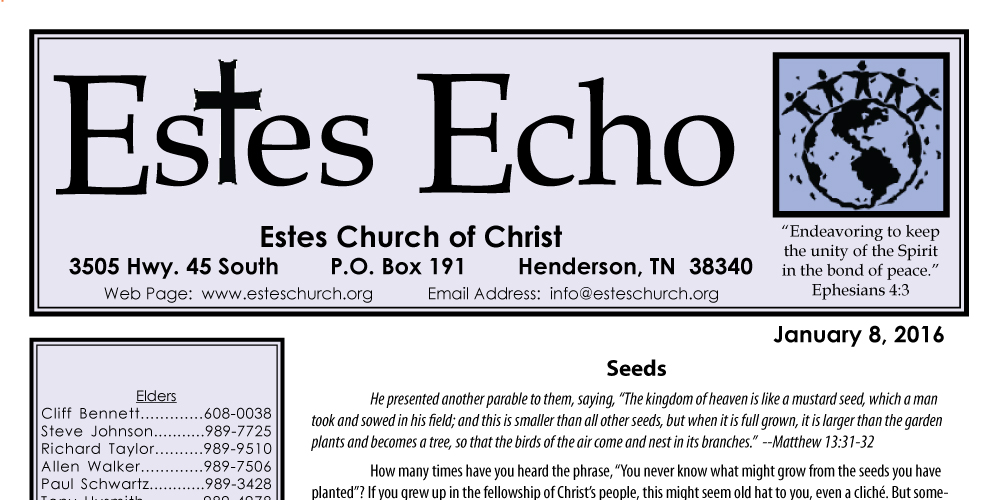 He presented another parable to them, saying, “The kingdom of heaven is like a mustard seed, which a man took and sowed in his field; and this is smaller than all other seeds, but when it is full grown, it is larger than the garden plants and becomes a tree, so that the birds of the air come and nest in its branches.” –Matthew 13:31-32

How many times have you heard the phrase, “You never know what might grow from the seeds you have planted”? If you grew up in the fellowship of Christ’s people, this might seem old hat to you, even a cliché. But sometimes sayings become clichés because there is truth in them. That can certainly be said for this important idea that we should remind ourselves of any time we feel as though our efforts for the kingdom are in vain. Perhaps the new year, as we are all thinking about renewal and doing things better, is an excellent time for us to be reminded of this old “cliché” and to strengthen our “resolution” to continue our work in the kingdom even when we cannot see the results.

Jesus frequently used images of gardens, growing plants, and planting seeds in his parables to illustrate our relation to his kingdom and how it works. My grandfather was a farmer—an expert on growing things from seeds and having faith in a result. He planted even though he had seen those seeds drained away by floods, blown away by winds, or dried up by the scorching sun. Despite these farming hazards, many years he watched acres of land sown with tiny seeds turn into fields of tomatoes or peppers, or corn that was enjoyed by thousands of people every summer. He knew the potential of those tiny seeds, and he knew the potential reward at the end of the season—a bounty of life-giving blessings.

Once when my grandfather was already elderly, but much younger than the 92 he was when he died, he was planting tiny trees along the dirt road that snaked its way to the back of our family homestead. My brother, a teenager, was helping him with the task. My brother’s mind was likely on something else, girls, or cars, or whatever it is that teenage boys think of when they are working on something they see as pointless. He had worked in the field with my grandfather many times; he had picked tomatoes and peppers for days on end. My brother, as a teenager, was already well aware of the rewards of planting and reaping. But these were tiny sticks. The dirt road went back into a wooded wilderness. There were trees all around. Why would we need to plant trees here?

Pa always had a vision—a good quality for a farmer, or a Christian for that matter—and he often shared those visions with his grandchildren. That day he told my brother about his vision for the roadside sticks they were establishing along an unused dirt road. “Someday, these will be tall trees, and they will form a tunnel of green along the road. It’ll be real pretty. I won’t get to see it, but maybe you will.” That road is now a city street that is well used by the residents who live along it. Most of them know nothing of my grandfather who is long gone, or even my brother who lives in another town now. Recently, a public figure in the community filmed a commercial on the street. The commercial pictures her jogging through the tunnel of green that my brother and grandfather planted so many years ago. The beauty and bounty of my grandfather’s vision for something good and useful that he would never even see was there for the benefit of a large community. We should not lose sight of the plans that our Father in heaven has for the souls of those who live in the world with us. We never know who will reap the benefits of our work; we never know what the bounty will be that comes from our efforts.

Now He who supplies seed to the sower and bread for food will supply and multiply your seed for sowing and increase the harvest of your righteousness; 2 Corinthians 9:10