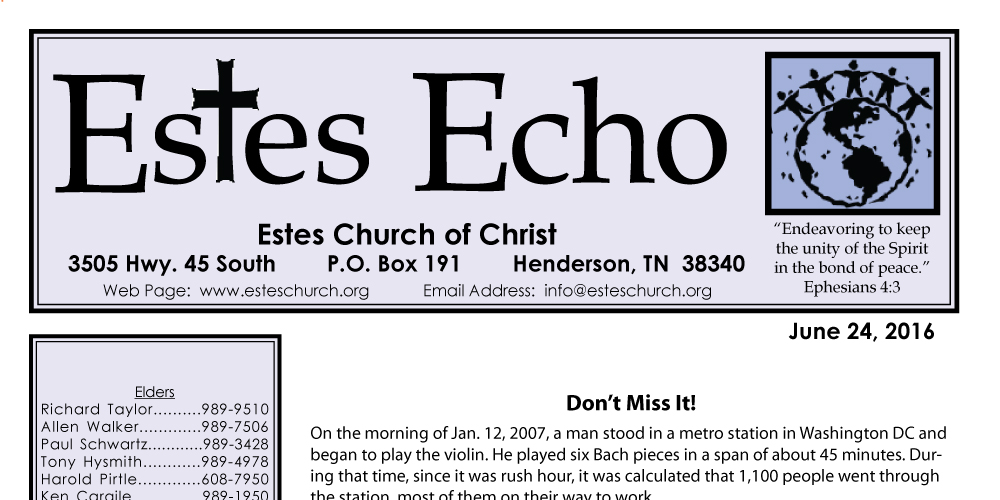 On the morning of Jan. 12, 2007, a man stood in a metro station in Washington DC and began to play the violin. He played six Bach pieces in a span of about 45 minutes. During that time, since it was rush hour, it was calculated that 1,100 people went through the station, most of them on their way to work.

Three minutes went by, and a middle-aged man noticed there was musician playing. He slowed his pace, and stopped for a few seconds, and then hurried up to meet his schedule. A minute later, the violinist received his first dollar tip: a woman threw the money in the till and without stopping, and continued to walk. A few minutes later, someone leaned against the wall to listen to him, but soon looked at his watch and started to walk again. Clearly he was late for work.

The one who paid the most attention was a 3 year old boy. His mother nudged him along, hurried, but the kid stopped to look at the violinist. Finally, the mother pushed hard, and the child continued to walk, turning his head all the time. This action was repeated by several other children. All the parents, without exception, forced them to move on.

In the 45 minutes the musician played, only 6 people stopped and stayed for a while. About 20 gave him money, but continued to walk their normal pace. He collected $32. When he finished playing and silence took over, no one noticed it. No one applauded, nor was there any recognition.
No one knew this, but the violinist was Joshua Bell, one of the most talented musicians in the world. He had just played one of the most intricate pieces ever written, on a violin worth $3.5 million dollars. Just two days before this incident, Joshua Bell sold out at a theater in Boston where the seats averaged $100.

On this day, the tremendous talent and skill of a virtuoso went largely unnoticed by most of the passers-by. Is it possible that we might be missing something even greater? God has put his virtuosity on display throughout time: “For his invisible attributes, namely, his eternal power and divine nature, have been clearly perceived, ever since the creation of the world, in the things that have been made” (Rom. 1:20). Don’t miss it!