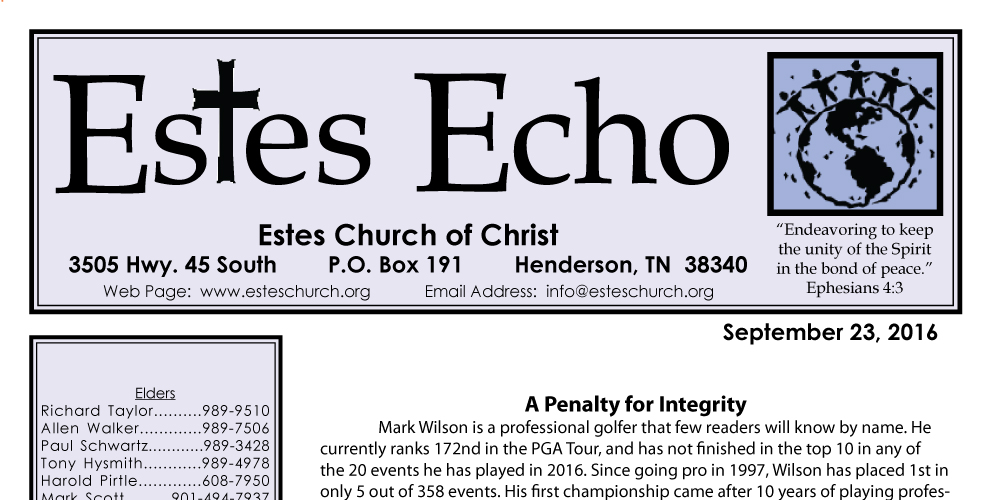 A Penalty for Integrity

Mark Wilson is a professional golfer that few readers will know by name. He currently ranks 172nd in the PGA Tour, and has not finished in the top 10 in any of the 20 events he has played in 2016. Since going pro in 1997, Wilson has placed 1st in only 5 out of 358 events. His first championship came after 10 years of playing professional golf, on March 5, 2007. At the end of regulation play, Wilson was tied with three other players. He then had to defeat them in a playoff to clinch the victory. Wilson could easily have won in regulation play, however, if he hadn’t been so concerned with being a person of integrity.

As Wilson took a shot at the 5th hole, an opponent behind him asked his own caddie what club Wilson had just used. Wilson’s caddie overheard, turned around, and casually told the pair what club Wilson had used. After finishing the hole, Wilson spoke with an official about a possible violation of the rules. The second part of the PGA’s eighth rule restricts players from giving advice to any opponents. Wilson told the official what had happened and the official quickly decided to penalize Wilson two strokes.

It would have been easy for Mark Wilson to simply ignore the unintentional violation, to address it privately to the caddie only, or to rationalize that he should not be penalized for someone else’s mistake. Instead, Wilson recognized that “the rules of golf are there to be fair for everyone” and he told the official of the possible violation (http://www.reuters.com/article/us-golf-pga-wilson-idUSL0535218320070305). He took a penalty to maintain integrity. When Wilson willingly took the penalty, he could not have known that doing so would put him in a playoff to win. One wonders whether he would have taken the penalty if he could have known that it might cost him his first championship. For a person of integrity, however, honesty must be maintained even when it comes at a cost.