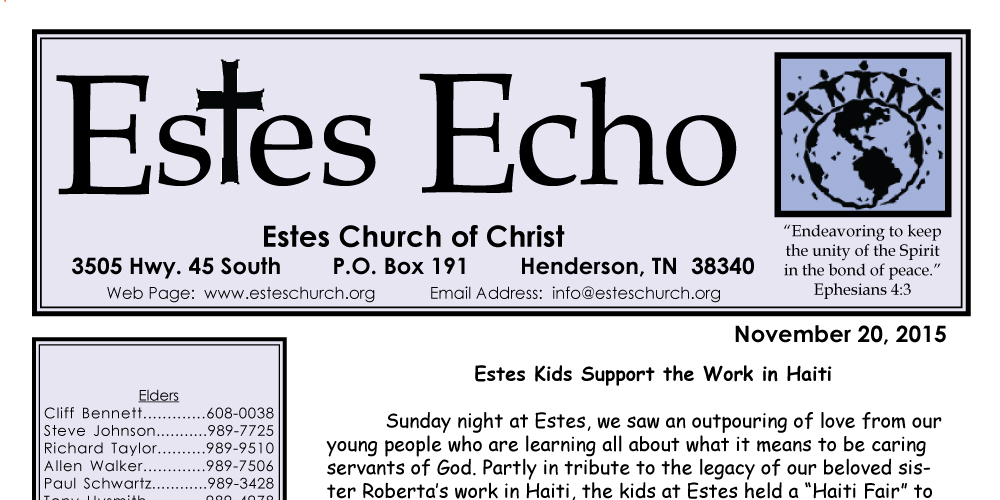 Sunday night at Estes, we saw an outpouring of love from our young people who are learning all about what it means to be caring servants of God. Partly in tribute to the legacy of our beloved sister Roberta’s work in Haiti, the kids at Estes held a “Haiti Fair” to raise money for the Lord’s work there in general and the SonLight Children’s Home in Port au Prince in particular. With their combined efforts, the event raised $1442.44.

While this was a combined effort of kids, parents, and the Estes members who bought lots of stuff, it was the brainchild of Dana Blackwelder, Kelsey Rotz, and Kelda Massey who developed and organized the event. Kelsey said that she was just “overjoyed” by the support given by the Estes members who came. Parents were excited to be involved and to have a fun way for their kids to be involved in the important task of helping others. She also said that one of her favorite things about the evening was seeing the excitement on the kids’ faces.

Kelda explained that once the idea was proposed to the Estes parents, they just ran with the idea. The kids were asked to come up with their own money-making ideas–something that they could make to sell, or a service that they could provide. The wares were quite varied and demonstrated a wide range of personalities and means of expression. Items and services included cookies and other baked goods, Christmas ornaments, birdhouses, original paintings (including some high-demand robot paintings!), dog sitting, and the melodies of our resident saxophonist. In all, 30 kids were involved. Parents, kids, and organizers all hope that this can even become an annual event.

Let’s all thank God for sending such tender and willing hearts that through his will can serve the church, the Lord, and his people into the next generation!