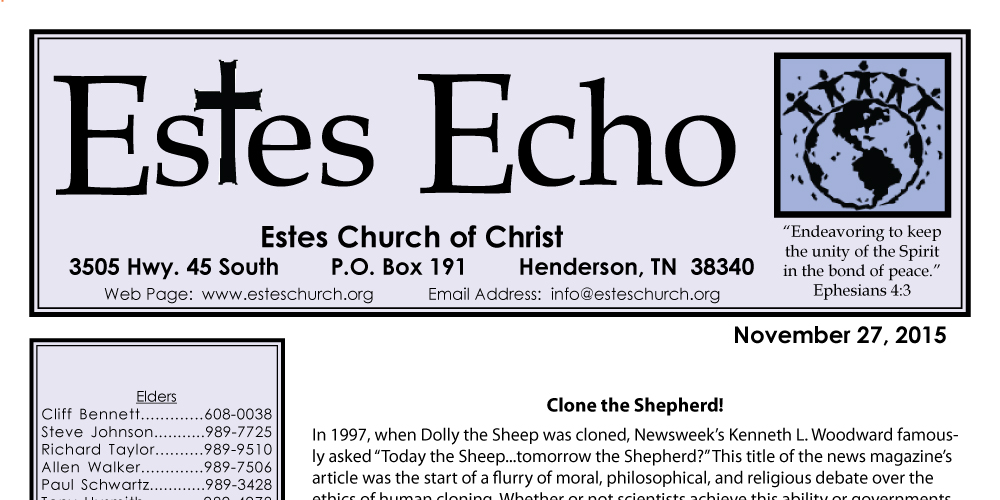 In 1997, when Dolly the Sheep was cloned, Newsweek’s Kenneth L. Woodward famously asked “Today the Sheep…tomorrow the Shepherd?” This title of the news magazine’s article was the start of a flurry of moral, philosophical, and religious debate over the ethics of human cloning. Whether or not scientists achieve this ability or governments allow the practice, perhaps Christians could place a more important metaphorical focus on the question posed by the Newsweek writer all those years ago.

Yes, we should “clone the Shepherd!”

The rulers in Jn. 12:42 faced much the same decision. They heard the word of the Shepherd proclaimed and believed it. But would they be cloned after Him? At the present they were cloned after the Pharisees. They decided to stay as they were, “for they loved the praise of men more than the praise of God” (vs. 43).

It is time to clone the Shepherd! The apostles were His clones. In Acts 5 they are being persecuted for following Him, but in vs. 29 they boldly say, “We ought to obey God rather than men.” Oh, for more people with that attitude today!

Paul makes it clear after whom he is cloned. In Gal. 1:10 he says, “For do I now persuade men, or God? Or do I seek to please men? For if I still pleased men, I would not be a bondservant of Christ.” Notice that Paul admits at one point in his life he was cloned after men (“if I STILL pleased men”). But in Acts 9 the Shepherd comes into Paul’s life, and he becomes a changed man. In 1 Cor. 11:1 we see the cloning of Paul to be like the Shepherd when he says, “Imitate me, just as I also imitate Christ.”

Can we speak like Paul to others? Are we imitating the Savior to that degree? Have we cloned the sheep or the Shepherd? Clone the Shepherd!