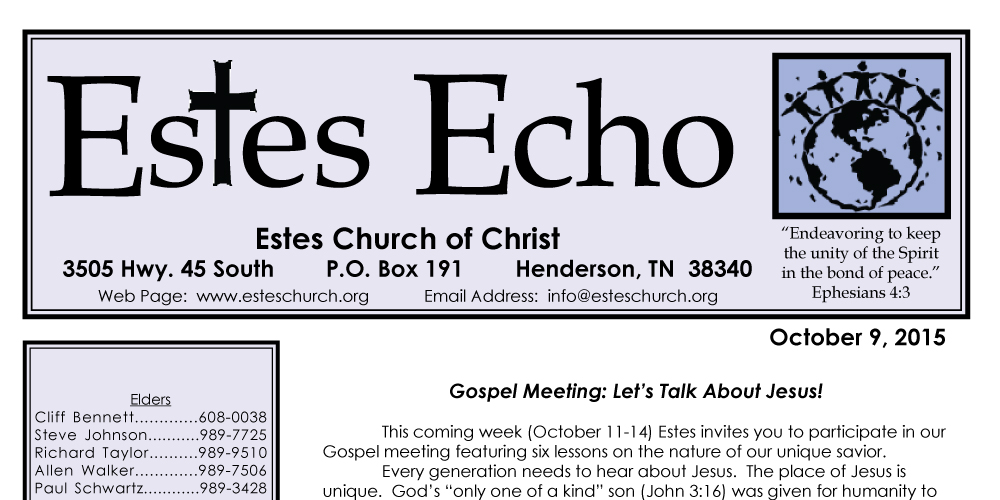 This coming week (October 11-14) Estes invites you to participate in our Gospel meeting featuring six lessons on the nature of our unique savior.

Every generation needs to hear about Jesus. The place of Jesus is unique. God’s “only one of a kind” son (John 3:16) was given for humanity to obtain eternal life. In 1 Timothy 3:16, the apostle Paul spoke of the great story of Jesus, once hidden but now revealed. Several qualities he attributed to Jesus include that He was manifested in the flesh, preached among the nations and received up in glory. Such restrained words stand for the marvelous revelation of Jesus. The four core lessons of our discussion will show more of the revealed place of Jesus, as the promised, rejected, crucified and risen Savior. It is a message that continues to need preaching today as much as it did when the voices of the apostles first echoed in the streets of Jerusalem. The Bible Class lesson is a stand-alone discussion of Christian joy drawn from Philippians. The final lesson will feature the Lord’s great parable of the prodigal son.

Our speaker for the week is Tim Orbison who is is in his nineteenth year preaching for the Maysville, Alabama congregation. He and his wife Libbie met and married while attending Freed-Hardeman and now have three grown children, Lauren Thompson, Leah Shull, and Tyler Orbison and three grandchildren. Tim holds degrees in Bible from FHU and Lipscomb (MAR). His interest in biblical archeology has taken him to Israel for times as well as to Greece and Egypt. He spent a month on an archeological dig in Israel at the ancient site of Ein Gedi, on the Dead Sea. Never a boring scholar, Tim’s interests also include flying as a private pilot, snowboarding, and tinkering with just about anything mechanical. He and Libbie both also enjoy long-distance motorcycle touring and camping.

Food for Orphanages & Books for School