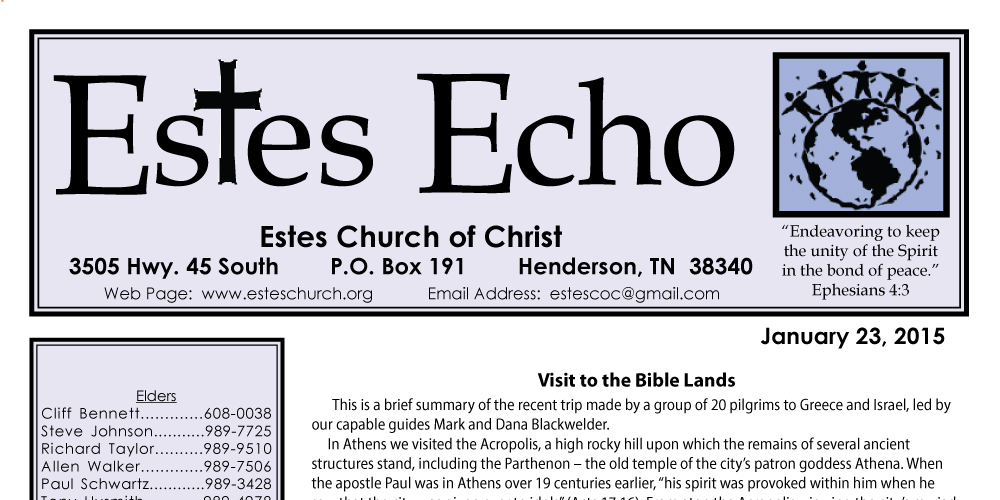 Visit to the Bible Lands

This is a brief summary of the recent trip made by a group of 20 pilgrims to Greece and Israel, led by our capable guides Mark and Dana Blackwelder.

In Athens we visited the Acropolis, a high rocky hill upon which the remains of several ancient structures stand, including the Parthenon – the old temple of the city’s patron goddess Athena. When the apostle Paul was in Athens over 19 centuries earlier, “his spirit was provoked within him when he saw that the city was given over to idols” (Acts 17:16). From atop the Acropolis, viewing the city’s myriad (tightly compacted) buildings and houses, it’s hard not to share the apostle’s deep concern for these precious souls. On the northwest side of the Acropolis, we climbed to the top of the Areopagus (“Rock of Ares”) or Mars Hill, where Paul had delivered his passionate speech about “the unknown God,” pleading for all to repent in view of the coming judgment (Acts 17:19-31).

From Athens we traveled about 1 hour by bus across the narrow isthmus to the ruins of ancient Corinth, a journey that would have taken Paul a couple of days by foot (Acts 18:1). We entered the city with intrigue and fascination, while Paul had come “in weakness, in fear, and in much trembling” (1 Cor. 2:3). We spent about an hour and a half exploring the empty ruins, whereas the apostle had invested a year and a half “teaching the word of God among them” (Acts 18:11). We wondered which of the dilapidated shops around the agora (marketplace) may have been used by Aquila, Priscilla and Paul to manufacture and/or sell tents (Acts 18:2-3). We viewed with interest the remains of the temples of Apollo and Octavia (cf. 1 Cor. 8:10) and the fountain of Peirene (cf. Acts 18:8; 1 Cor. 1:14-16). But perhaps the most poignant site was the Bema where Paul had stood trial before the proconsul Gallio (Acts 18:12-16), after which he left behind a thriving community of believers (Acts 18:18; 1 Cor. 1:2).

While the proliferation of man-made shrines, cathedrals, pseudo religion, and commercialization has significantly detracted from the modest dignity of many of these sites, it helps to remember that there is nothing inherently sacred about any given place on earth. What really matters is what God has accomplished throughout history and all that he continues to accomplish in every place through his Son Jesus Christ.

Most would agree that the highlight of the trip was worshiping with the Lord’s church in Nazareth. The last time Jesus was in Nazareth, even though he was among his hometown kinsmen, he was rejected and mistreated (Mark 6:1-6). But thanks to him, we were warmly welcomed in the midst of our spiritual family. Nowhere on this trip did we ever feel threatened or in danger, but it was in Nazareth, in the company of our brethren, where we felt right at home. “Now, therefore, you are no longer strangers and foreigners, but fellow citizens with the saints and members of the household of God” (Eph. 2:19).