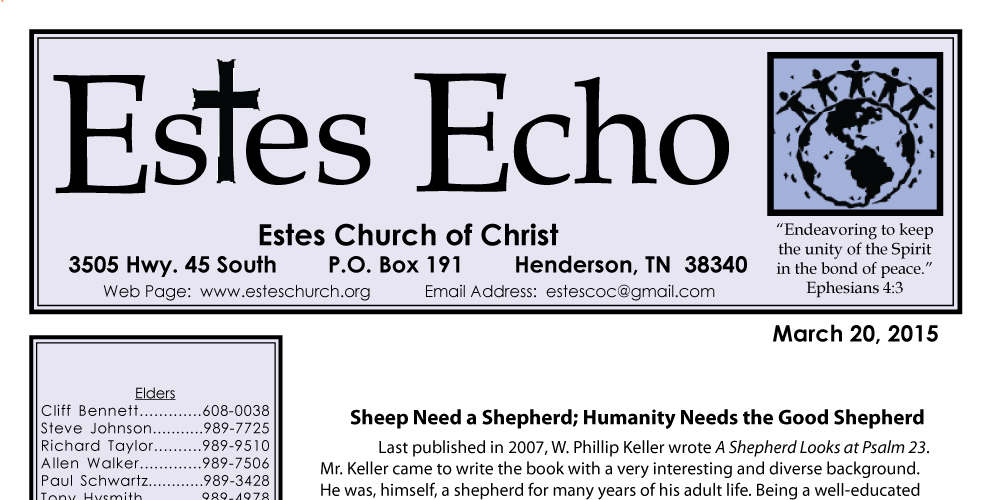 Last published in 2007, W. Phillip Keller wrote A Shepherd Looks at Psalm 23. Mr. Keller came to write the book with a very interesting and diverse background. He was, himself, a shepherd for many years of his adult life. Being a well-educated man, he spent the last several years of his professional life working as a scientist. This placed him in an interesting position when he wrote A Shepherd Looks at Psalm 23. He was able to provide insight from a practical standpoint because he was a shepherd and he was able to write from a technical standpoint because he understood the science behind why shepherds do the things they do.

In the book, Mr. Keller tells of how he would often lead a flock of sheep to a luscious, green pasture. The pasture was often fenced in and would have good water available and nutritious plants for the sheep to eat. He relayed how there would always be one, and maybe a few more, lambs who would walk along the fence looking for a way out. There were always sheep that wanted to escape. The sheep would often escape to pasture that was dangerous for them and even to pasture that was much worse for them. They were just looking for a way out.

Mr. Keller then relayed how the sheep would develop an intimate relationship with their shepherd and would do anything they were directed to do. He told how he could lead a sheep to the slaughtering block and they would blindly follow him, not being cognitively aware they were being led to their death. And, in the pasture at large, the sheep would be headed for their own death or demise without the shepherd’s direction.

It is interesting how children of God will study His word and often attempt to look for a way out of the directives given by God. Isaiah described humanity: “All we like sheep have gone astray; We have turned every one, to his own way” (Isaiah 53:6). Often times, Christians look for a way out of God’s directives and it is ultimately to their own demise. Sheep need a shepherd and humanity needs the Good Shepherd.

It is also easy to imagine a lamb following shepherds to their own death. The lambs were, of course, led to their own death by the priests of the old law and did not have any awareness they were to be slaughtered. It was not that way with the Lamb of God. Christ was led to His own death completely aware He was to die on Calvary’s tree. “He was oppressed and He was afflicted, Yet He opened not His mouth; He was led as a lamb to the slaughter, and as a sheep before its shearers is silent, So He opened not His mouth” (Isaiah 53:7).

Incite: A movement of God’s men
Scroll to top