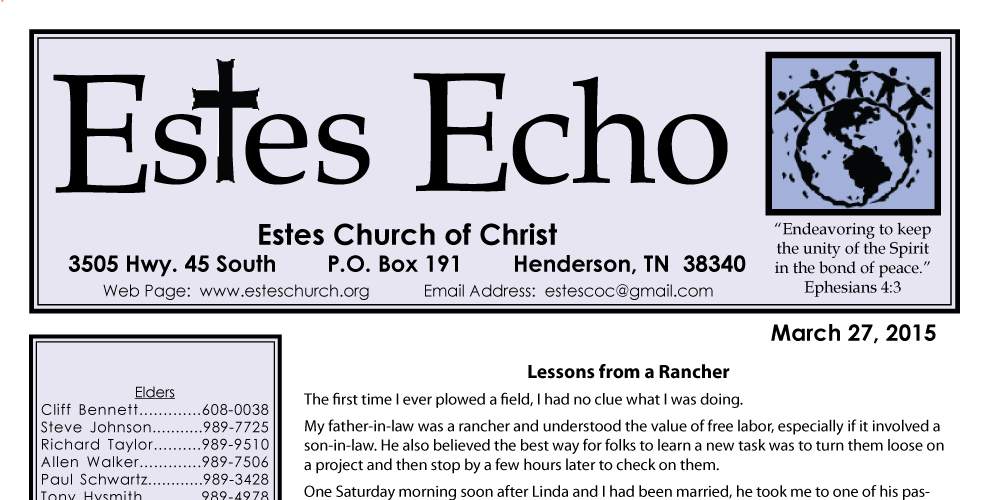 Lessons from a Rancher

The first time I ever plowed a field, I had no clue what I was doing.

My father-in-law was a rancher and understood the value of free labor, especially if it involved a son-in-law. He also believed the best way for folks to learn a new task was to turn them loose on a project and then stop by a few hours later to check on them.

One Saturday morning soon after Linda and I had been married, he took me to one of his pastures that rested along a creek bottom. We pulled up next to a fairly large tractor located near the edge of the field. We stopped. He reached in his pocket and pulled out a set of keys. He asked me if I’d get started plowing the field while he went to town. Before I had a chance to affirm, he gave me the keys, kicked me out of the truck, and indicated he’d see me in a couple of hours.

Oh my. I had never driven a tractor and most certainly had never plowed a field. The only thing I had going in my favor was that I could drive a standard. After much trial and error, I figured out how to start it, make it go forward, and how to use the hydraulics to raise and lower the large apparatus behind the tractor. The trial-by-fire experience undoubtedly was a sight to behold, so I’m thankful the field was located far off the beaten path.

A few hours later, my father-in-law returned. He pulled into the field and headed toward where I was plowing. He stopped and got out of the truck. I stopped and dismounted from the tractor. We met somewhere in the middle, and he opened with a question, “How’s it going?” I shared with him that after I got the tractor started and figured out the controls, things seemed to be going pretty good. He laughed as if surprised by my ineptness. Back then, I thought it an honest mistake. Some 30 years later, I know that it was the calculated pedagogy of a master teacher.

He affirmed I was doing a pretty good job, all things considered, which then led into him highlighting several opportunities for improvement. Specifically, he noted I was looking behind the tractor too often. He encouraged me to pick out a place at the end of the row, point the tractor toward it, and keep looking at the point until I reached the end of the row. He told me to listen to the tractor to figure out what was going on behind. He said the engine would let me know if I was plowing too deep, too shallow, or if I needed to slow down or speed up.

I was all of 20 or 21 years old when he shared a whole lot of wisdom with me in that four or five minute conversation. The main lesson of the day was not about driving a tractor. It was a lesson, a living parable, designed to illustrate a life-principle found throughout the Bible, perhaps most directly in Philippians 3:12-14 “Not that I have already obtained all this, or have already arrived at my goal, but I press on to take hold of that for which Christ Jesus took hold of me. Brothers and sisters, I do not consider myself yet to have taken hold of it. But one thing I do: Forgetting what is behind and straining toward what is ahead, I press on toward the goal to win the prize for which God has called me heavenward in Christ Jesus.”

Let us continually strain toward what is ahead: toward that future, that vision, that promise. Let us intentionally and passionately ask, seek and knock all along the way; let us listen. Let us forget what is behind, and let us be quick to throw off all those things that slow us down or keep us from reaching that future.

Incite: A movement of God’s men