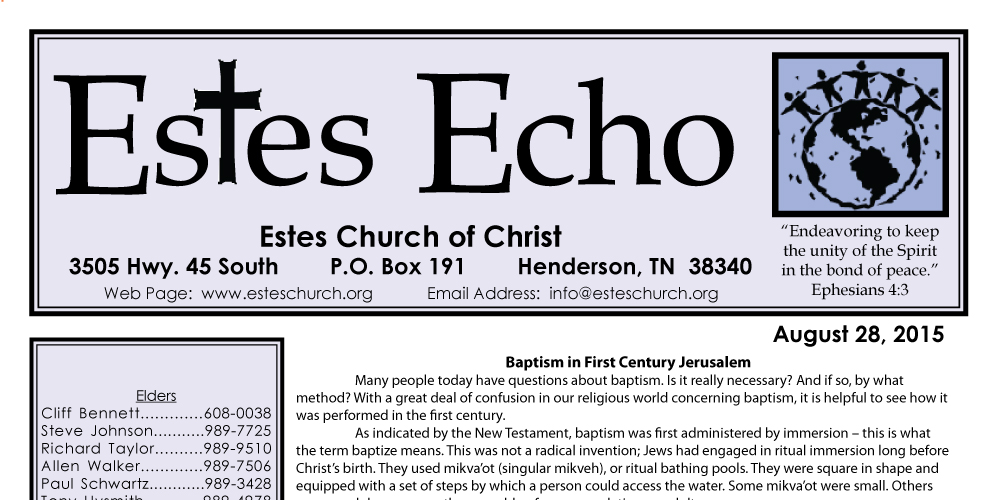 Many people today have questions about baptism. Is it really necessary? And if so, by what method? With a great deal of confusion in our religious world concerning baptism, it is helpful to see how it was performed in the first century.

As indicated by the New Testament, baptism was first administered by immersion – this is what the term baptize means. This was not a radical invention; Jews had engaged in ritual immersion long before Christ’s birth. They used mikva’ot (singular mikveh), or ritual bathing pools. They were square in shape and equipped with a set of steps by which a person could access the water. Some mikva’ot were small. Others were much larger, more than capable of accommodating an adult.

The Greek word baptizo means to plunge, dip, or submerge. There would be little question about this fact if English translators had chosen to translate the term rather than transliterate it. This decision permitted the continuation of methods already in use that had developed over time, such as sprinkling and pouring.

In the first century, baptism was considered indispensable. This is reflected in the writings of some of the early church fathers. For example, Tertullian called Christians were “little fish” because they were “born in water” (De Baptismo, 17). In time, other methods began to be used. This may have begun in order to accommodate those who did not have adequate availability to the proper facilities. Today, sprinkling and pouring remain as popular methods. Some, recognizing the need for water but exercising greater flexibility, go even farther. I once knew a Presbyterian minister during my time in seminary who “baptized” a man by dipping his thumb into a cup of water and then placing it on the man’s forehead.

The question inevitably arises, “If baptism was by immersion only, how were 3000 people baptized on Pentecost?” To put it simply, mikva’ot were everywhere in Jerusalem. Archaeologists have discovered well over one hundred of them in Jerusalem, with nearly forty within a stone’s throw of the Temple Mount. We have to remember that these pools were for both inhabitants of Jerusalem and pilgrims. This is in addition to the mikva’ot that were part of every synagogue. Additionally, the mikva’ot at the Temple Mount were fed by nearby cisterns which, in turn, were fed by aqueducts so that the pools would have plenty of water.

Jewish believers took ritual purity very seriously. In pictures of mikva’ot, we might notice that there is often a stone dividing line going down the middle of the pool’s staircase. This was to ensure that the ceremonially unclean person did not ascend the same way in which he had entered the mikveh. The distinction between clear and unclean was crystal clear – a person descended down one side of the steps and ascended the other.

Some today may be tempted to think that people make too much of baptism. They disagree that baptism is necessary, citing passages stating that salvation does not consist of works (Eph. 2:9). Here they equate baptism with some kind of meritorious work. Scripture does not define it this way. Instead, it is merely the final act of faith in which one demonstrates his or her commitment to Christ. And its importance is emphasized by Luke, who was careful to record baptism as a part of every conversion experience in the book of Acts.

We might look at another example. If the man born blind had never washed his eyes at the pool of Siloam per Jesus’ instructions, would his eyesight have been restored? Personally, I don’t think so. What if he had washed in some other body of water? Jesus didn’t command him to do that. Jesus gave him specific instructions. If the man had not obeyed, then we have no reason to think that he would have been able to see again.

The offer of sight was a free gift, as long as a specified conditions was met: the man was to wash his eyes in the pool of Siloam. Does this mean the man earned his sight? Of course not. Similarly, salvation in the New Testament has its own conditions. Everyone–excepting the universalists–agrees that faith is a requirement; this is beyond dispute. For those who insist that baptism is necessary, this is merely part of the requirement of faith, as the Bible makes abundantly clear.

–Dewayne Bryant, reprinted from his blog, Looking at all Things Spiritually,
https://dewaynebryant.wordpress.com/2015/04/23/baptism-in-first-century-jerusalem/