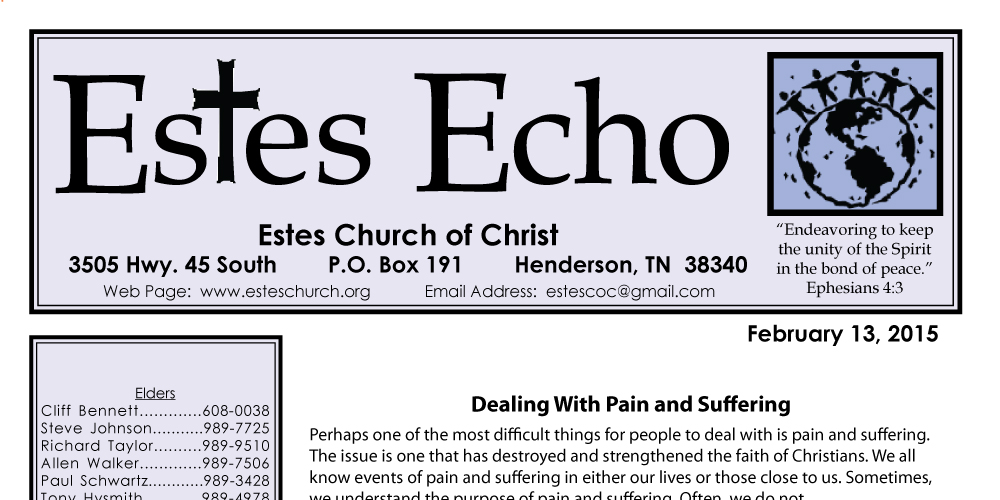 Dealing With Pain and Suffering

Pain has always been a part of the world. Adam and Eve felt pain when Cain killed Abel (Genesis 4:25). Job felt pain when his earthly possessions were taken and his children were killed (Job 1:13-19). Paul spoke of his “thorn in the flesh” (2 Corinthians 12:7). The book of Acts tells how the apostles and other first-century Christians experienced pain.

The presence of pain can seem inconsistent with the presence of an all-loving God. Why would a God of love allow evil/suffering in the world? Why would Paul say “…we know that all things work together for good to those who love God, to those who are the called according to His purpose” (Romans 8:28)? This passage can be troublesome for those experiencing pain.

Pain and suffering can be attributed back to the beginning of time. It began in the Garden of Eden when Eve, and then Adam chose to sin (Genesis 3:14-19). The events of the garden provide an explanation to the existence of pain – the poor decisions of the first couple. Poor decisions have consequences which can carry into today. God gave man the ability to choose. Adam and Eve chose poorly. Just as the consequences of a bad decision are passed on from one generation to another, so can the blessings from good decisions.

Understand genuine biblical joy. Paul instructed us to “Rejoice in the Lord always. Again I will say, rejoice!” (Philippians 4:4). How, in the midst of pain could he command such? The answer in choosing to rejoice. Paul later said, “Not that I speak in regard to need, for I have learned in whatever state I am, to be content: I know how to be abased, and I know how to abound.

Everywhere and in all things I have learned both to be full and to be hungry, both to abound and to suffer need” (Philippians 4:11-12). He chose contentment and we must do the same.

Everything has purpose. From Romans 8:28, we learn that pain and suffering have meaning. This can be a difficult concept to understand. There are things in life and in religion that are difficult to understand. Perhaps, we are not to analyze in order to understand but accept God at His word. Sometimes, we will understand and other times, we are left to wonder. Focusing on biblical contentment and accepting God’s word can provide comfort.