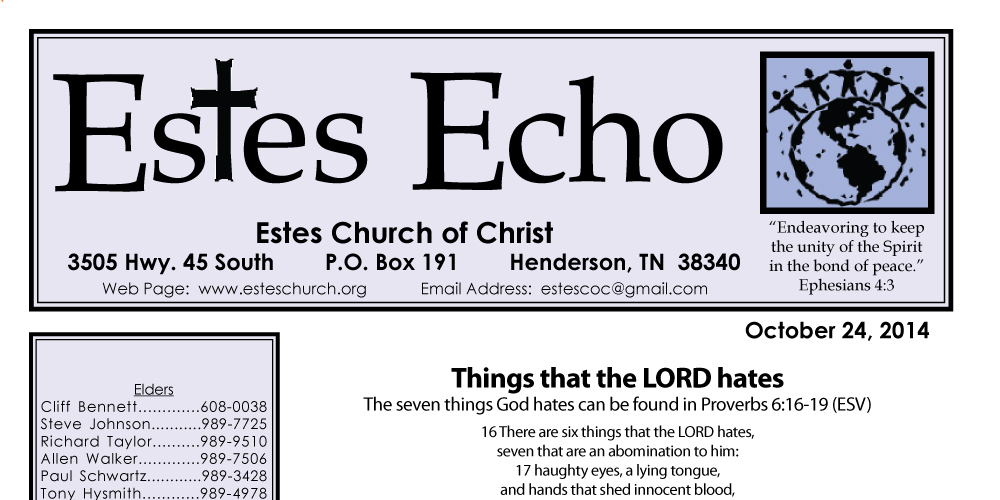 Things that the LORD hates

The seven things God hates can be found in Proverbs 6:16-19 (ESV)
16 There are six things that the LORD hates,
seven that are an abomination to him:
17 haughty eyes, a lying tongue,
and hands that shed innocent blood,
18 a heart that devises wicked plans,
feet that make haste to run to evil,
19 a false witness who breathes out lies,
and one who sows discord among brothers.

While these aren’t the only sins that should be avoided, they do sum up most of the wicked things condemned by God. These things are repugnant to our Lord. Take special note that these things are issues of the heart.

Haughty eyes: This describes a feeling of arrogance, pride, and thinking of ourselves more highly than others. This is an outward manifestation of a proud heart. God hates haughty eyes, but loves humility.

Lying tongue: There is not much we do that causes us to more closely resemble Satan, who is the father of lies (John 8:44), than lying. God hates lies, but loves truth.

Hands that shed innocent blood: This refers to cold blooded murder, but it also refers to anyone hating someone else, 1 John 3:15. God hates the shedding of innocent blood, but loves life.

Feet that are quick to rush into evil: This refers to a heart that is inclined towards evil instead of towards good works. A person with this kind of heart is weak and will too easily slip into sin. Instead of fleeing that which is evil, this person tends to align with evil. God hates feet that run rapidly towards evil, but loves a heart that is zealous for good works.

False witness who pours out lies: Here we are talking about a more specific form of lying, that of accusing someone of something they did not do. God hates false witnesses that lie, but loves truth.

A man who stirs up dissension among brothers: Anyone who purposely causes disruption to peace in the body of Christ will displease God above all, since that person gives room for others to sin and for himself to sin further. God hates dissension, but loves peacemakers.

It does us all good to regularly look at our hearts, our motives, our desires, making sure they are something God loves and not something God hates!