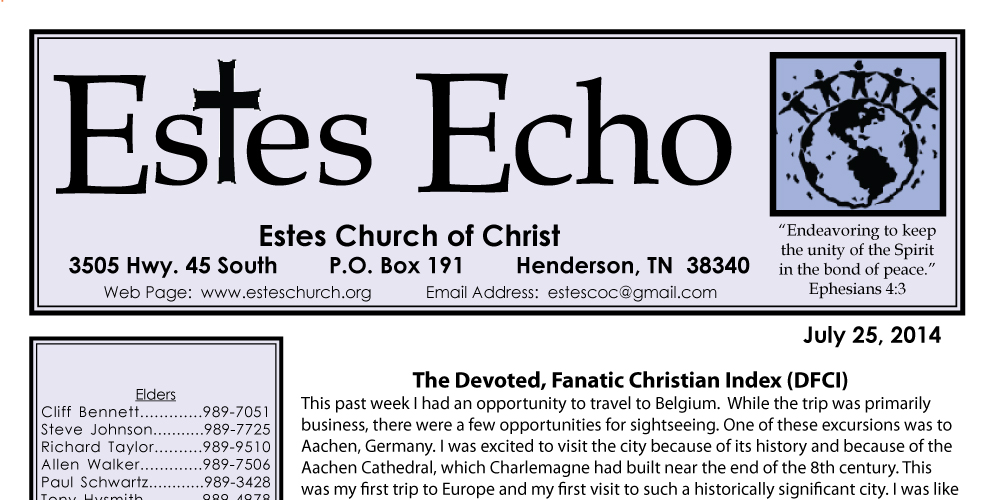 This past week I had an opportunity to travel to Belgium. While the trip was primarily business, there were a few opportunities for sightseeing. One of these excursions was to Aachen, Germany. I was excited to visit the city because of its history and because of the Aachen Cathedral, which Charlemagne had built near the end of the 8th century. This was my first trip to Europe and my first visit to such a historically significant city. I was like a kid in the candy store. Around every corner was another eye-opening, jaw-dropping adventure. The city’s history, art, architecture, sculpture, and most certainly, the cathedral, were impressive and far exceeded anything that I could have imagined.

As evening grew closer and our afternoon-adventure seemed to be coming to an end, something peculiar began to happen. The city began to have a certain buzz about it. The streets became more crowded. People were walking faster and more intentional. Conversations were louder and more passionate. We began to see clothing and accessories donned in hues of red, yellow, and black, which corresponded to the German flags carried by others. Yes, we found ourselves in Germany the night that Germany played in the finals of the World Cup. Even in my fog of world-cup illiteracy, I realized the significance of the moment. Hence, I quickly agreed when it was suggested that perhaps we remain in Germany for dinner and watch at least part of the game. We maneuvered through the growing crowds toward the university area of the city where we found a pizzeria with several large-screen televisions. Outside of being at the World Cup, this seemed to be the next-best seat from which to watch this once-every-four-years game. The scene was laden with emotion, national pride, passion, and fanaticism.

I have continued to think about that scene and the human behaviors surrounding it. This week those thoughts turned to more spiritual in nature as I read from gods at War by Kyle Idleman. In a chapter on the god of entertainment, Idleman challenges the reader to think about a scene where, “People arrive hours early for church. On Sunday mornings, they don’t just set a backup alarm clock to assure they wake up in time; they set a backup for the backup. They arrange their schedules to make sure they don’t miss gathering for worship. Throughout the week, they talk about what happened on the previous Sunday as excitement builds for the upcoming church service…All-day talk shows on the radio devoted to reviewing last week’s service and breaking down the next one…When Sunday comes, the members start loading up their trucks, SUVs, and sedans hours before the service starts…The roads are congested on the way to church, no matter how early you leave. At church, there are vehicles parked as far as the eye can see…”

When I read this section, I couldn’t help but think about my experience in Germany. Those were devoted fanatics, at least for that night. I then wondered how my life might be different if for every minute of every day I was a devoted fanatic of Christ, which then led me to think about those things to which I could label myself a devoted fanatic: Oklahoma football, work, family, and perhaps God. I wondered where I would rank on the devoted fanatic Christian index (DFCI), if such an index existed? I thought about where I spend my time, my money, and my thoughts and the quality of each.

Solomon, after a life of devotion to many things, concluded that the duty of man was to fear God and keep his commandments (Ecclesiastes 12:13). Christ linked our treasures to our heart and challenged us to focus on eternal treasures (Matthew 6:19-21). Paul challenged us to take captive every thought and to make those thoughts obedient to Christ (2 Corinthians 10:3-5).

Let us passionately persist in our efforts to be devoted fanatics [workers] for the kingdom of God.