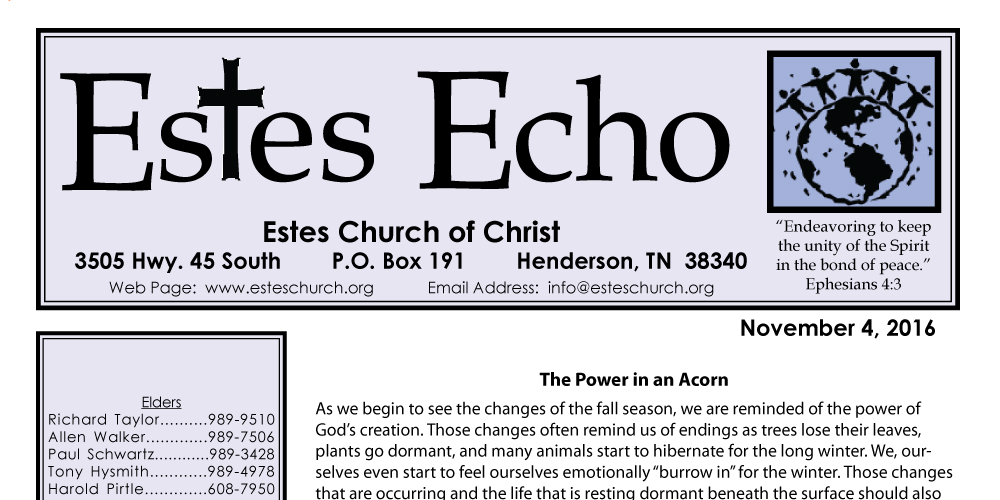 The Power in an Acorn

As we begin to see the changes of the fall season, we are reminded of the power of God’s creation. Those changes often remind us of endings as trees lose their leaves, plants go dormant, and many animals start to hibernate for the long winter. We, ourselves even start to feel ourselves emotionally “burrow in” for the winter. Those changes that are occurring and the life that is resting dormant beneath the surface should also remind us of God’s great power and glory. Those tiny, seemingly helpless acorns that litter our yards are small but powerful.

The story is told of a German countess, centuries ago, who was an avowed atheist. In an attempt to show her fearlessness of death, and to belittle the faith in God and the hope of eternal life of some of her associates, she left instructions that when she died she was to be placed in a specially prepared tomb, hewn out of solid rock, to be sealed with an enormous flat stone weighing several tons. This stone was to be bolted securely to the face of the tomb, and these words were to be carved on the face of it, “What Is Dead Is Dead–Set Forever–Never To Be Opened.”

When the countess died, her wishes were carried out and her body was sealed in the sepulcher. For several decades her tomb remained intact and seemed to be impregnable. But as the years passed, an acorn from an overhanging oak fell, and found its way through a crevice of the rock and lodged in the earth beneath. The acorn germinated, and the fledgling tree, seeking the sunlight, eventually made its way back up through the crevice. Gradually but relentlessly the tree grew, and eventually, mighty life from that acorn snapped the bolts and shattered the seal of stone! Thus, God in His infinite wisdom, through the incomprehensible power of life that He had fashioned in that small acorn defied the brazen infidelity of the countess.

How sad that she had turned deaf ears to the words of the Savior when He declared, “the hour is coming, in which all that are in the graves shall hear his voice, and shall come forth …” (John 5:28-29). It is true we must die a physical death (Heb. 9:27), but it is just as true that there will be a resurrection and judgment, and that the souls of human beings will exist forever in one of two places! (Read Matt. 25:31-34, 41, 46). No wonder Jesus said, “For what is a man profited, if he gain the whole world, and lose or forfeit his own self?” (Luke 9:25).

God’s power is everlasting and always surrounding it whether we acknowledge it or not. We likewise can be a part of that power if we allow it into our lives and acknowledge it as being from God. Jesus said that the “faith the size of a mustard seed” can accomplish great things (Luke 17:6). Look for the power of God around you today.