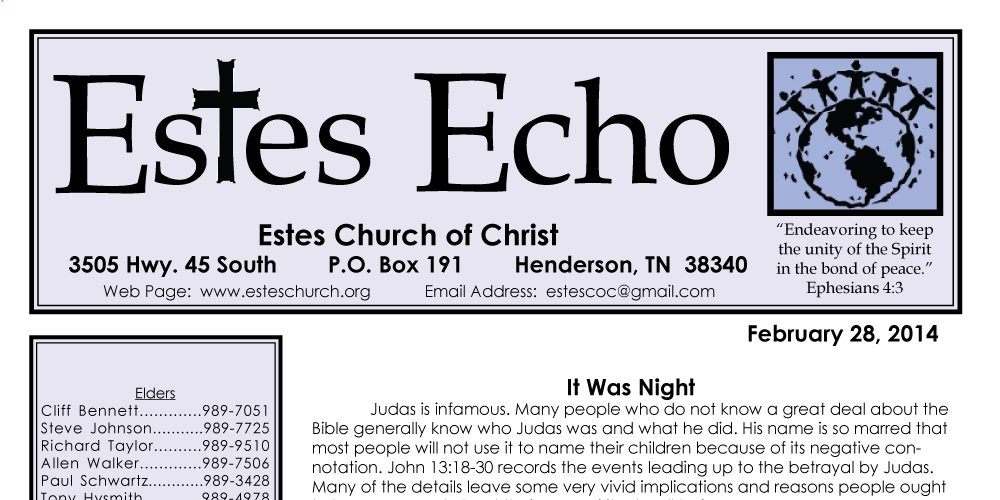 Judas is infamous. Many people who do not know a great deal about the Bible generally know who Judas was and what he did. His name is so marred that most people will not use it to name their children because of its negative connotation. John 13:18-30 records the events leading up to the betrayal by Judas. Many of the details leave some very vivid implications and reasons people ought to be concerned about their own spiritual well-being.

Of course, the narrative of John 13 is not the first time one reads of Judas and his dishonesty. In John 12:1-8, we read that Judas was upset with Mary, the sister of Lazarus, because she was using costly perfume to anoint the feet of Jesus. While he stated the reason for his concern was that the perfume could have been sold and the money given to the poor, the text tells us the real reason Judas was upset. In John 12:6, the Bible says, “This he said, not that he cared for the poor, but because he was a thief, and had the money box; and he used to take what was put in it.” Many have made the observation that Judas did not just wake up one day and decide the betray Jesus. Rather, the path of greed started much earlier with his thoughts and led him to the betrayal of Jesus.

One person made the observation concerning the amount for which Judas betrayed Jesus. Historically, it was not a great amount of money. Some have observed that it was the price of a common slave (Exodus 21:32). The implication is that that Judas did not think any more of Jesus Christ than he thought of a common slave. It is a telling statement of just how far some will go for a little sum of money. John 18:1-2 shows that the place where Jesus was to be betrayed was a place that He went often. His disciples also went to the garden often. Judas, one of His disciples, was not just some mere acquaintance to Christ. He was a close friend – one who betrayed his friend, his Savior, for just 30 pieces of silver.

Another interesting point is the chronology of the events. In Matthew 26:25, Judas asked Jesus if it was he who would betray Him. He had already sealed the deal in verses 14-16. Judas asked Christ if he was the one to betray Him knowing it was the case. The extent to which a greedy person will go for money and prominence can indeed be great.

The last three words of John 13:30 are powerful: “…it was night.” Judas shows that when a person conspires to do evil, that person is in darkness spiritually. The comparison of darkness and light to sin and righteousness are seen in the actions of Judas. When men sin, for them it is night — spiritually, morally, and perhaps even physically. Yes, it is the gloomy evening of the dark shadow of night. How do Christians avoid the darkness? They must walk in the light. 1John 1:7 says, “But if we walk in the light as He is in the light, we have fellowship with one another, and the blood of Jesus Christ His Son cleanses us from all sin.”